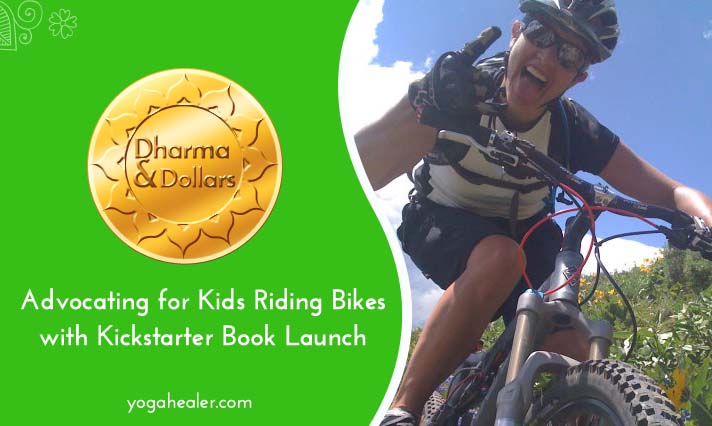 Indy made up this song around two and a half years old, scooting herself around the kitchen on her pedal-less toddler bike. Her bike was the center of her entertainment in the center of our house for two years. She sang that song hundreds of times, which you’ll hear me spontaneously perform live in this episode.

On today’s Dharma  & Dollars show  local Teton Valley Idaho resident, Jannine Fitzgerald talks about her family’s kids bike advocacy work in the world. She and her husband Scott are in the homestretch of their second kickstarter campaign to fund their second kid’s book which serves as a tool for bike advocacy.

Belief #1: Bikes are freedom machines that build experiences and values that become the foundation of lifelong success and happiness.

Belief #2: The # of kids riding bikes is declining. I rap with Jannine Fitzgerald about Kid’s Bike Advocacy:

In 2015, Scott and Jannine Fitzgerald decided to sell their shop, Fitzgerald’s Bicycles, which they had owned and operated since 2002. While running the store, Scott and Jannine saw, time and time again, the positive impacts bicycles have on people of all ages, as well as communities as a whole.
What they came to refer to as ‘the Power of the Bicycle’, took hold of them over the years and led to the launch of Buddy Pegs, their new company.

Buddy Pegs was created to connect kids (and parents) to the building blocks of lifelong happiness through the power of the bicycle.

Their first product, a children’s alphabet book titled B is for Bicycles, is their first foray into the media market. This children’s book was successfully funded via Kickstarter in 2014, and brought to life in 2015.

The Fitzgerald’s are now taking their passion for bicycle advocacy outside of their home in the Tetons (Jackson Hole, WY / Teton Valley, ID), and across the world. By creating bicycle experiences for kids, and their parents, Scott and Jannine plan on showing how the bicycle really can be a simple solution to the world’s most complex problems. And just a lot of fun!