Dear You,
By now you have realized I’m sending a party in your inbox. It’s going to keep coming as we wend our way through more massive lessons, subject by subject, that you may have missed at school. And why all the fuss?

Firstly, I deem it essential for us to own and activate our sacred anatomy.

Secondly, I’m doing the virtual equivalent of jumping up and down and wave my hands in the air to call a little attention to the 9 month journey on Sacred Anatomy called the Living Ayurveda Course. Now is the smart time to apply for September’s class. Details here: Thus far in our little journey through my Ayurveda sacred anatomy lessons we’ve been transporting our awareness around. In transporting our Consciousness we’ve hopefully become more grounded in the territory of our anatomy. We are in the door of the inner universe and the outer universe, and we have some landmarks. Let the chemistry lesson begin.

Chemistry is about the Laws of energy and matter. If you see the world through a material lens, you talk a lot of about changes of matter at the level of molecular interaction. If you see the world through an energetic or Ayurvedic lens you talk about the spectrum of energy from subtle to gross, with gross energy looking a lot like matter. Through either lens, it’s all about the laws of nature, actions and reactions, and being able to consistently predict cause and effect. And for the hippie-dippies out there who don’t dig science, you’ll love this: Chemistry becomes from the word alchemy. So if you love the concept of alchemy… you really love chemistry.

Sacred Chemistry is what happens when we perceive the transmutations and subtle gradients. We allow and observe the energetic transfers between energy (prana) and matter (everything prana can influence). The hard scientists may cringe. Cringe away – we hippie-dippies don’t care. And check out the genius work of Dr. John Hankey who is mapping Ayurveda out in hard science. Liberated from a more material approach to chemistry, we are free to see why indeed Ayurveda has been around so damn long and just won’t quit.

If you want to understand your sacred anatomy- Ayurveda has the best language for it. Yes, I’m biased. But I’m also informed which is why I choose Ayurveda to study to wake up to my subtle anatomy. I wasn’t disappointed.

What we’ve done so far is move our awareness into our body through conscious relaxation and the ensuing natural expansion. Then we moved our awareness up and down from root to crown and back again. (Inner body flossing) Then we moved it from our body into the cosmos. We strengthened the muscle of awareness and strengthened the ability to transport awareness from gross to subtle. For Chemistry to become Sacred Chemistry we need to beat a path to the door of the subtle. Note: In yoga and Ayurveda we can assume we’re already at gross from (a) being in a body and (b) observing the intrinsically expansive nature of consciousness.

Movement = the vehicle of consciousness. The transportation of consciousness. From where to where becomes from what to what as soon as we enter the field of matter. (P.S. the word Prana is short for Prana Vayu. Vayu means vehicle. Vehicle of energy of the cosmos. Let that sink in.)

When you consciously relax your body you transport consciousness into your body. From where? From wherever it was before it was on relaxing your body. Something moved. That something is subtle – way more subtle than a thing or a thought. The movement of consciousness carries the energy and the intelligence of the cosmos from one place to another. As Indy would say, hither and yon. Where your awareness co-participates with your biochemistry your biochemistry becomes conscious… becomes sacred.

Through observing and honoring subtle awareness our cells become informed by a master operating system. We can activate our intrinsic operating system with energy and intelligence and the power of effective organization. This also brings up another point we’ll get into in the Ethics Lesson: if our chemistry is aligned we act smarter the more days we spend more days on Earth.

In Sacred Chemistry you are the Chemist.

You become a conscious operator of consciousness. But, like Odin figured out… you’re not really the operator. This is why yoga and ayurveda differentiate between the small self and the big Self. (Side note: this is also why every religious or spiritual or non-denominational mindfulness tradition worth it’s salt plants the teaching of surrender or receptivity pretty early in the program.)

After you surrender the natural distraction of your ego you can transport awareness into the field of Awareness. When that happens… you become a better personal chemist. Your anatomy starts to get penetrated or turned over by consciousness. When you move awareness… you move prana. The prana enters the cell. The cell gets a hit. A hit of what? Of the energy an intelligence of the cosmos. Which is smart. And energetic. Your cells changes from the hit. The change is the alc

hemy. It’s the cause and effect. The action and reaction. The change is the turnover of consciousness entering and impacting a cell with prana. And prana = smart energy. Get it? Good, because we need to move on:

“Systems theory identifies three fundamental processes requiring regulation present in any system: input/output (transport), turnover, and storage (Weinberg, 1975). This is as true for any subsystem as it is for the overall system, and indicates that regulatory control factors should be present in triplets: one each for transport, turnover, and storage.”

In Ayurveda these 3 tools … the 3 energies… the 3 regulators are the name of the game. The game is the system. And remember the system is you. We name the regulators Vata, Pitta, and Kapha. When they show up in the body – it’s gross. Not eeeww gross… just gross in terms of physical or sthula or annamayakosha. When they show up less physically, say in the mind or the emotions… we call it subtle or sukshma or manomayakosha. Body-Mind. Mind-Body. Psychosomatic. The 3 regulators regulate everything that happens within the psychosomatic.

When the regulators are informed by consciousness and communicating well and playing nice – they do a fantastic job regulating their subsystems. In Ayurveda, this is the terrain of the 15 subdoshas. Let’s not go there now. The point is the 3 regulate the overall system, which is you. Then, each of the 3 is in charge of 5 subsystems. When regulation is optimal, consciousness regulates the subsystems from subtle to gross, from simple to complex… and we get to benefit of optimal health. We have informed cells. We have teamwork with a loving, smart boss. When The Regulators are messed up the sub-systems run amok.

Let’s go over some practical applications to land this lesson in reality.

Moving all over the place and forgot where home is? Subtle Vata input issue.

Turning over you food into energy too quickly and getting hyperglycemic? Gross pitta turnover-on-steroids Issue.

Churning ideas in your mind and it won’t let you sleep? Too rapid a turnover for optimal functioning and desired end product creation. Subtle Pitta turnover-on-steroids issue.

Larger than you want to be? Gross structural problem there. Kapha issue.

Do your moods weigh you down? Subtle structural issue. Subtle Kapha issue.

This is an over-simplication… but you get the idea. What is totally dynamically nut-so about Ayurvedic chemistry is that the system and the diagnostics and the cure are all way more easy to see at the same time. It’s radically simple… but works and holds true on levels of bizarre complexity. Dr. Alex Hankey says it better, “Dosha-based etiology provides as significant a description of the health of an organism as of its pathology.”

Etiology means the cause. It means the origin of the outcome. Subtle to gross. Energy to matter. And that is the radist of the rad and the reason behind allopathy getting hip to psychosomatic medicine. Subtle to gross is the key behind the vibrant health of your sacred anatomy.

It also means we never really get away with anything. We’ll dive in that in our next lesson on Applied Chemistry… which any of you whose brains don’t work this way will like the next Lesson more.

For now, to make it practical, we all have tendencies around these 3 forces. Our sacred anatomy came with imprints.

We all have to keep an eye on all 3 forces… but particularly on one or two. Our constitution identifies our disease proclivities. Proclivities aren’t realities. They are a just tendencies which are easily avoidable when brought to the light of day.

When we’re conscious of our tendencies we are better at self-regulating. Self-regulating is a voluntary cooperation with the 3 forces or 3 regulators. We choose to self-correct before we end up too far down the rabbit hole and lose the light of day. By self-correcting we carry more light deeper into the rabbit holes – deeper into our disenfranchised cells. The more cells get consciously connected – the more we activate or plug in our sacred anatomy.

A student of mine from Living Ayurveda told me she has learned to self-correct. When you know you’re down the rabbit hole, and you know how to get back to the light of day, you’re self-correcting. In other words, when you connect the dots from regulator to subsystem – and the smart juice gets flowing – we’re pulsating with dynamic tri-doshic balance.

And one more groovy note on this…

The more you get plugged in – meaning the more the 3 regulators have good clean access to regulate the 15 subsystems… the smarter you get. I’m talking cellularly smart. When this happens, food that is bad for you tastes bad for you. People who are bad for you feel bad for you. There are a million signals in every moment. And you’re picking them up and making smart choices based on your multi-sensory data field.

Do you see the hierarchy? It’s crucial. It’s not an anything-goes kind of reality, but more of a top-down and bottom-up system. The 3 doshas are a regulatory hierarchy that coordinates the more complex subsystems of the body. Subtle to Gross. Simple to Complex. The simplicity contains the complexity. We’ll get into that more during the Metaphysics Lesson.

For the sake of this conversation above is subtle and below is gross. Think Heaven and Earth. When you start flossing your inner body on or off your mat your awareness gets more subtle. Then you do some sun salutations and you bring the subtle into the gross. You deliver the prana into your cells. You start to get an all-access pass. And you come off the mat feeling like the superstar you are cosmically designed to be.

Like this?
You’ll love Living Ayurveda. We do this for 9 months and you get a personal practical tasty tour of your hierarchy and subsystems. Now is the smart time to apply for next September’s class. Details here: 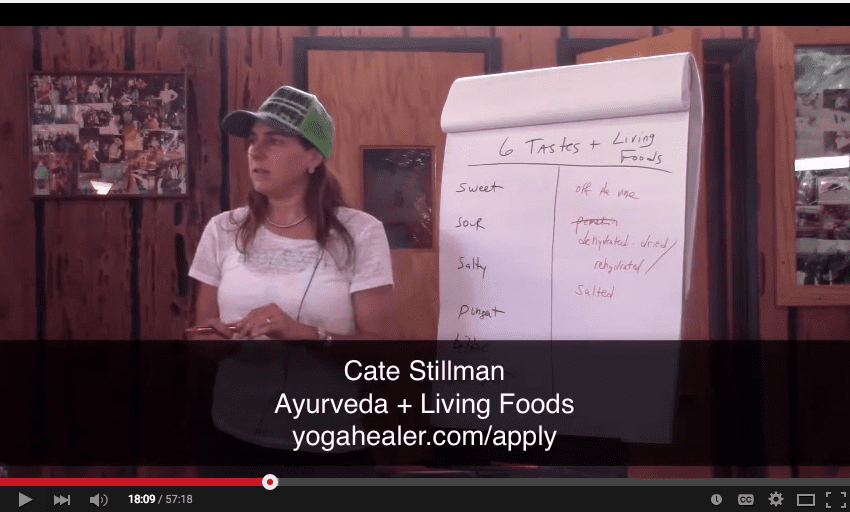